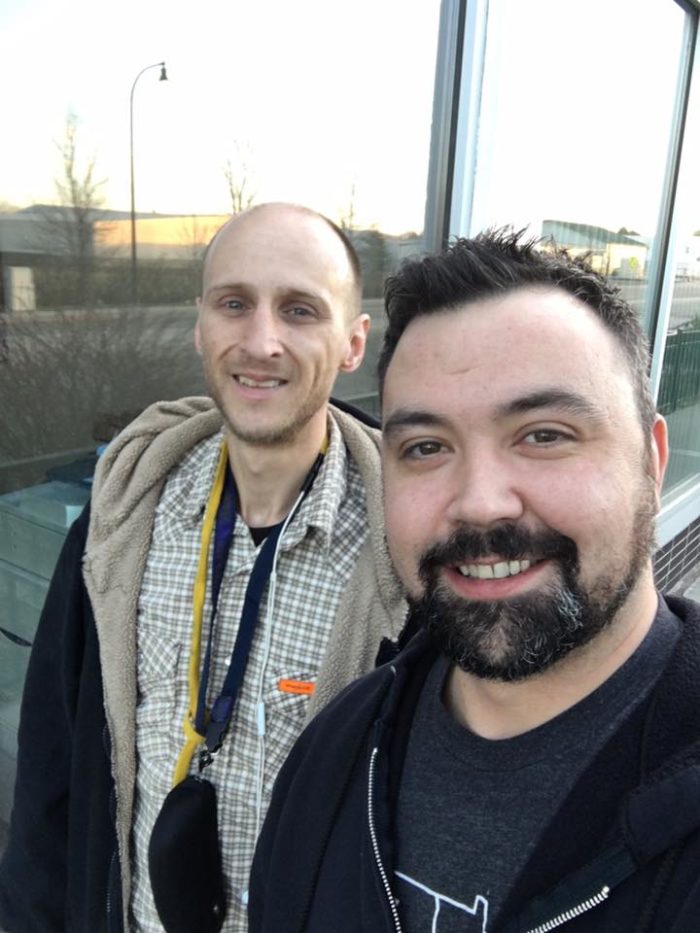 Many of you know that a few weeks ago, Chris started staying on my couch. After picking him up in Minneapolis, we stopped at Burger King and I noticed something after we were done eating. He grabbed my trash and his and threw it away. He held the door open for both of us when we walked out. He wasn’t looking for a handout, he was looking for a chance.

We didn’t even make it out of the cities and he fell asleep. He slept all the way back to Fargo, and went to bed as soon as we walked into my place. After years of battle, he was finally able to get a full nights rest. After a few days of getting hydrated and food in his stomach, he beat the street looking for a job. After a few days with no luck, he started to get frustrated. Frustration turn to morbid reflection which in turns anger. The viscous cycle was starting to blind him and he was ready to give up. After some good talks with people who have been in his shoes, he kept his chin up and continued to try.

Me: Well, its pretty late, lets not worry about shelters right now, I’ll come get you and you can spend the night. We will figure out the rest tomorrow.

When I picked him up I noticed he had a hooded sweatshirt for a jacket. No gloves, no hat, polo t-shirt, jeans and shoes. -17 Below with a Real Feel of -35…

Me: Alright man, lets see if we can get you into one of the shelters.

As we get ready to leave, I notice “guy” had a new jacket, duffel bag full of clothes and boots.

Me: Where did you get that stuff?

I look back at Chris and see him smiling from ear to ear.

After we got guy into the shelter, Chris asked me a question. “What do you think his chances are?”

Me: I dont know, its not up to me. But what I do know is your chance just dramatically increased. What you did for that man is what going to help you be successful. I cant explain it, you can call it whatever you want, magic, grace or even magic grace, I dont care. But whatever it is, its going to change you. So keep doing it.

The next day, Chris had a bunch of employers calling him in for interviews. Coincidence? I like to think it something much bigger than that.

Be The Chance. Help Others.